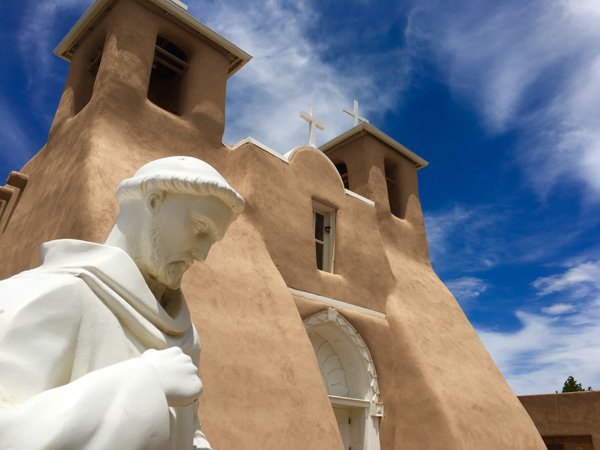 Ask a local what brought them to live in Taos and they would likely answer, “I think I was called to be here.”  No wonder as the area’s art and culture, serene mountain views, eclectic food scene, early history, and unique architecture will keep you busy exploring all of the various attractions that make this city a magical place. Here are some of the best must-see wonders of Taos.

The Millicent Rogers Museum is based on the life of a New York socialite who visited Taos in order to gain peace of mind. She fell in love with the thriving, edgy, artistic town and over time, contributed her own sense of style and made an impact on the popular culture of her day.

Millicent Rogers’ unique chic blends Native American turquoise and silver jewelry with high couture fashion. Along with a collection of her personal jewelry, there are displays of priceless Southwestern pottery, textile blankets, and serapes. More than 7,000 objects of art are rotated in the well-designed museum that was established as a memorial to her.

A delightful walking tour is available through the Taos Artisan Tours by Heritage Inspirations, LLC. A well-informed guide leads the way down Kit Carson Street to visit the points of artistic history that put Taos on the map.

First stop is the Couse-Sharp Historic Site where Eanger Irving Couse and Joseph Henry Sharp began recruiting artists from the Eastern United States to come and paint new subject matter of local flora and the Native Americans. The beautiful Northern light of New Mexico was truly an inspiration for the painters.

After Couse’s death, his son maintained his father’s studio just the way it was left. Everything is authentic, and the brushes Mr. Couse used are still in their original place. The tour continues on to visit the studios of contemporary artists such as Rich Nichols, Tres Estrellas Design, and Inger Jirby where they work daily on their latest pieces.

Many Americans are not aware that there are 19 Pueblo communities between Albuquerque and Taos. The northernmost of these, the Taos Pueblo, is believed to have been established nearly 1,000 years ago. Taos Pueblo is the only living Native American community that has been given both the World Heritage Site designation by UNESCO and National Historic Landmark status.

For an admission fee, tourists can visit the walled-in city, and resident guides will tell you the about the fascinating historical culture and traditions of the many generations of families who have dwelt there. About 150 Pueblo inhabitants still live in their adobe homes, amazingly with no electricity or running water—  as simply as their ancestors did long ago.

Many who live there set up little shops outside their homes selling jewelry, Indian fry bread, pastries, and crafts. As one young local said, “We don’t want to sell out to modernism; we want to keep it authentic.”

Taos Plaza is located in the heart of downtown. With a reputation of once being a wild and wooly West hotspot, shootings, hangings, excessive drinking, and human trafficking all contributed to its notorious past.

Throughout the years, repeated fires burnt down the surrounding wood buildings until adobe construction put a halt to the destructive cycle. The Hotel La Fonda de Taos is a testament to this as it has stood since 1820. Many celebrities and notable citizens have stayed here, including Judy Garland, Georgia O’ Keefe, and Dennis Hopper, and D.H. Lawrence whose Forbidden Art paintings are restored and on display in the hotel.

One side alley off of the plaza is called Teresina Lane, named after the daughter of Governor Charles Bent. In 1847, Bent was trying to keep peace among the Spaniards and local Indians, but in a grave misunderstanding, he was murdered near the Taos Plaza. Today, the cobblestone alley houses tourist shops that lead to Alley Cantina, a popular restaurant and watering hole for the locals.

The beloved Taos Plaza is also a central meeting place for festivities. Throughout the summer on Thursday evenings, various local musicians are featured, and tourists can visit shops in the plaza that offer candles, jewelry, fine art, and souvenirs. From May to October, a thriving farmers’ market on Saturdays sells fresh juices, produce, honey, homemade cheeses, bread, and ethnic pastries.

Kit Carson is a household name and part of American West folklore.  His original Taos home and museum is worth a visit to learn about this legendary frontiersman who was highly respected among the people of his time. Tragically, his wife Josefa died 10 days after giving birth to her last child, and Carson passed away one month to the day after that. Their gravesite is a short distance away in the Kit Carson Cemetery.

An award-winning History Channel video accompanied with exhibits, storyboards, and a well-stocked bookstore all impart information about this colorful period of history.

The Taos Art Museum at Fechin House contains a stunning collection of art from past notable Taos artists. Nicolai Fechin was a Russian artist who escaped the Bolshevik Revolution and eventually ended up in New York City where he painted portraits. Lured by fellow Taos artists, he made his final home in Taos and built an exquisite hand-crafted adobe home.

Today, his residence is known as The Taos Art Museum and displays his paintings and woodcrafts along with those of past fellow artists. Cultural events and exhibits occur throughout the year so there is always something new to see and do. Take time to browse the gift shop located on the landscaped grounds.

Los Rios River Runners is an outdoor adventure company offering a variety of river rafting adventures on the Rio Grande and Rio Chama Rivers. The Sunset Dinner Float takes place in the early evening and is a smooth and tranquil raft ride down the Rio Grande River. Your guide will keep you entertained with colorful Western stories, and there is a good chance of spotting wildlife creatures such as beavers, mule deer, and wildcats. The raft ride concludes on the riverside with a sumptuous outdoor meal cooked under the evening stars.

Much older than even the Taos Pueblo is the Rio Grande Rift, 6 miles deep and 20 miles wide. The Rio Grande Gorge Bridge is the 5th highest in the United States and spans 650 feet above the Rio Grande River. This man-made marvel of engineering has been featured in several films such as Terminator Salvation, Wild Hog, and White Sands. The completion on this bridge project opened up Route 64 in Taos to the west and the north, creating easier access to parts of Taos County.

This popular tourist attraction is also an active church since its completion in about 1815 and was recognized as a National Historic Landmark in 1970. It is considered the oldest existing Catholic Church adobe structure in the Taos Valley and is one of the finest examples of a Spanish Colonial New Mexican church. Georgia O’Keefe found its twin towers to be an inspiration for several of her famous paintings.

Parishioners and volunteers gather each year for the enjarre during the first two weeks of June. This is when the mudding (restoring the outside walls) occurs in the traditional way of mixing clay, straw, sand, and water.

Inside the hall hangs the 19th-century painting by artist Henri Ault, The Shadow of the Cross. It is also known as a mystery painting due to the fact that it is said to glow in the dark. You can see it for yourself for a $3.00 donation, which goes towards preserving this beautiful historic church.

“There are no straight lines in Taos!” according to one guide. This can be found in the round curves of the adobe architecture, the cobblestones, and the many celestial symbols of the sun and moon in the local decor. Here, the relaxed attitude of the locals and shopkeepers slows down the pace of a once hurried tourist. The warm hues and bright colors happily stimulate the senses and have compelled many to pull up stakes and make Taos their permanent home.

Lodging in Taos offers a diversity of bed and breakfasts, inns, and hotels—in the country with open skies or in the heart of town within walking distance of shops and art galleries.

Casa Gallina is owned and cared for by Richard Spera who has created a little respite consisting of four casitas (adobe dwellings) and a delightful chicken coop that adds a touch of rural country. Fresh eggs are supplied daily along with fare from the vegetable and herb garden, and guests can pick what they desire to create a delicious omelet in the kitchen. The casitas are cozy and tastefully decorated with a Southwestern charm.

At the Hacienda del Sol Bed and Breakfast, guests can find several shady spots to relax in and around the 1 1/2 acre property with stunning views of the Taos Mountain and nearby, easily accessible attractions.

Each of the rooms has a distinctive Native American decor with Mexican tile baths and kiva fireplaces. Full, made-to-order breakfasts and afternoon snacks are available.

The rooms at the Palacio De Marquesa are decorated in an upscale Southwestern motif. Guests order their breakfast the day before, and the morning meal is delivered to their room in a woven basket. Fresh French-press coffee, hash browns, eggs, breads, and jams are among the items on the menu. Full grown mature trees and a wild flower garden surround the property, keeping it shady and beautiful.

The pet friendly Adobe and Pines Inn Bed and Breakfast was among the Top Ten Most Romantic B&B by American Historic Inns. The Native American inspired decor and rooms containing private soaking tubs and fireplaces. Breakfast specialties are offered in the morning room, and guests can also relax in the outdoor seating areas.

This was a sponsored trip; however, all opinions herein are the author’s.