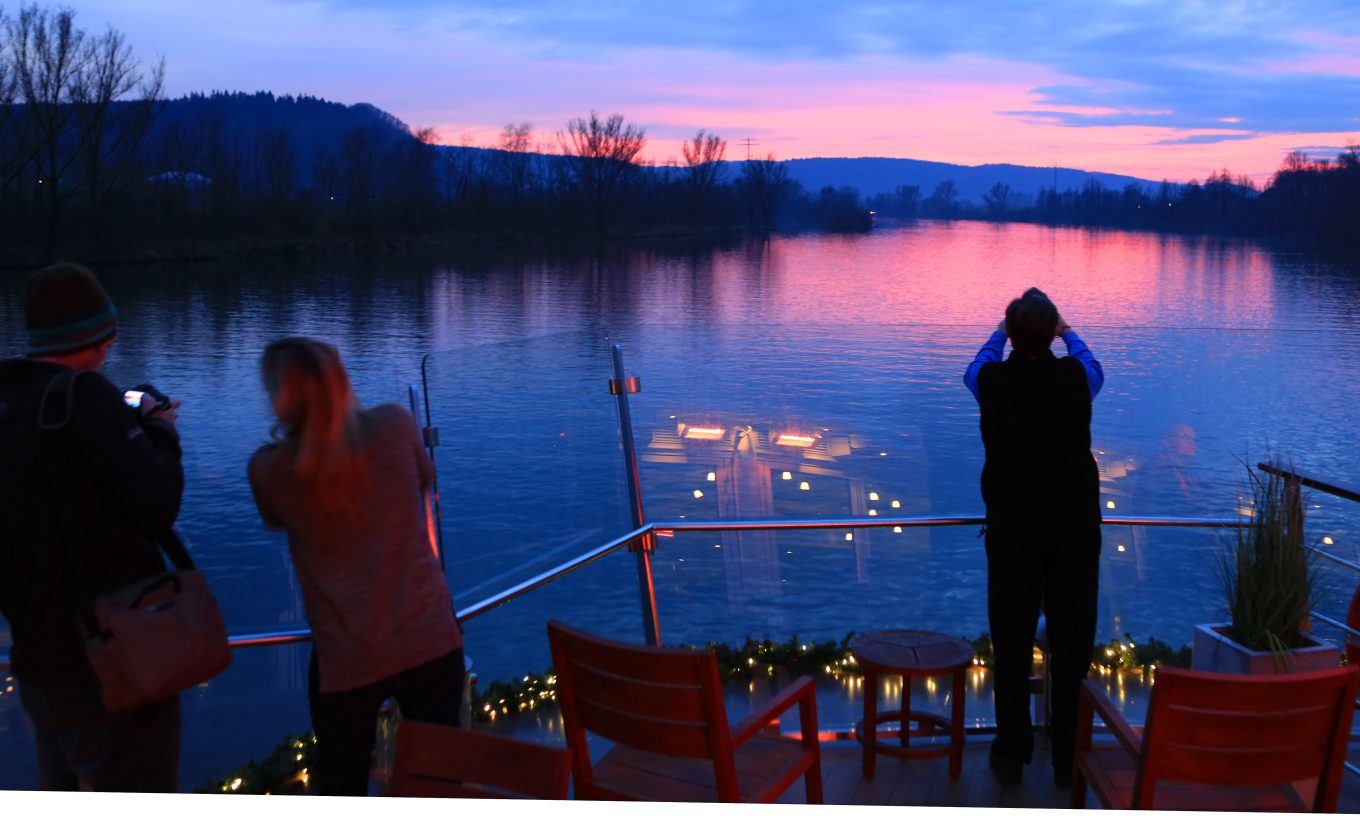 Most folks have seen the Viking Ship Cruise commercial where a soothing voice enticingly says, “When you glide through the heart of landscapes and cities on a river: a rare and unforgettable tale unfolds!”

I was excited when I found out that Ron and I had a story to cover aboard one of these long ships in Europe. But I was not as enthused when I notice that it would be in the middle of December. All of a sudden I had a lot of precise planing for both the holiday “doings” along with packing for this two week trip.

When we arrived in Budapest, Hungary, we rode a taxi to the hotel. We needed a good night’s rest before boarding the ship, Atla, the next afternoon. I learned something new: the hilly Buda is located on the north side of the River Danube and the flat city of Pest is on the south. In 1873, the two cities incorporated to become one.

Viking Ships carry about 200 passengers. Our cabin was cozy, clean, and comfortable. It had a flat screen TV and a desk area with room to set up a laptop computer. The heated bathroom floor was a nice luxury on cold mornings. I liked that in the large dining area, one can choose to sit at any table. I “hopped ” tables at every meal and as a result made friends with people from New Zealand, U.K., Canada, and America. We had a lot of laughs over our differences and similarities of life.

The focus of this particular cruise was the famous Christmas Markets held in various cities throughout Europe. (I wrote more about Christmas Markets in my forthcoming book, The Travel Writer’s Wife.) Ron and I walked to the one held on the Pest side of town. It was festive and crowded with happy people. I found it interesting to see the Hungarian food influence of cabbage rolls, goulash and chimney cake.

When time is short, I like taking a guided bus tour to get a quick overall view of a city. Out guide was an ex-pat American with Hungarian roots. She spoke of Hungary’s colorful history along with contemporary news. (Syrian refugees had just previously crossed through Budapest.)

We drove past the Zoo, Hero’s Corner, 18th century mansions, the Jewish quarter, the Parliament building, the House of Terror, and the Great Hall Market. Later on my own, I had the opportunity to visit the beautiful National Art Gallery. Echoing thru the vestibules were the voices of a children’s choir singing Hungarian Christmas songs. The art collection was fabulous and an inspiration to me.

Our next port stop was in Vienna, Austria. Unfortunately the weather was freezing cold, so our walk around the city was cut short. No matter, we enjoyed a thick hot chocolate and apple strudel at the famous Demel. Since 1888, this Viennese coffee house has been serving cream cakes, scones, and their famous Demel Sacher Tortes. In the evening we took a tour of the Schonbrunn Palace, a former Imperial summer residence. On the grounds of the glorious palace was a Christmas Market. Vienna was placed on my revisit list!

Near Melk, Austria , we visited a 5th generation-owned winery and they served us a delicious lunch. The mascot cat, “Splash”. was trying so hard to retrieve morsels of food from the visitors. We toured the Melk Abbey where monks live and the village children attend school.

During a tour of Passau, Germany, we attended an interesting gingerbread demonstration and was delighted to partake of samples. After that was another festive Christmas Market to explore.

At our boat’s stop in Regensburg, Germany, I signed up for a walking tour that focused on the Jewish Quarters and the sad effects that World War II had on this city’s Jewish population. I saw a building with a blue plaque on the side of an apartment building commemorating Oskar Schindler who lived at this location at one time. Impressive!

In Nuremberg, Germany, our guided bus tour drove through this historical city. A stop at the Nazi Rally grounds where Hitler gave his notorious shouting and spitting speeches, was a bit eerie.

In my journal I wrote, “Sometimes it’s the small things that excite me the most when we travel. “Purchasing a set of Pigment Liner Pens from the Staedtler store was one of them. Good sketching pens! The Staedtler  company is known for exquisite writing instruments and is located on a main street in Nuremberg.

In Nuremberg I visited three contemporary art museums,and joined a walking tour of the city. I stumbled along the cobblestone streets (so European!), while eating a bratwurst from the  Christmas Market. I bought some funny Santa hats, and a book about Germany’s recovery after WWII: Germany 1945: From War to Peace, by Richard Bessel. (A good read of information.)
So what did I learn from this trip? I gained some more interesting European historical facts and that it was so peaceful to temporarily turn off from the world’s sad events. And for a while, it was fun to feel like a tourist; without any heavy thinking to do! I should like to sail away again; soon!