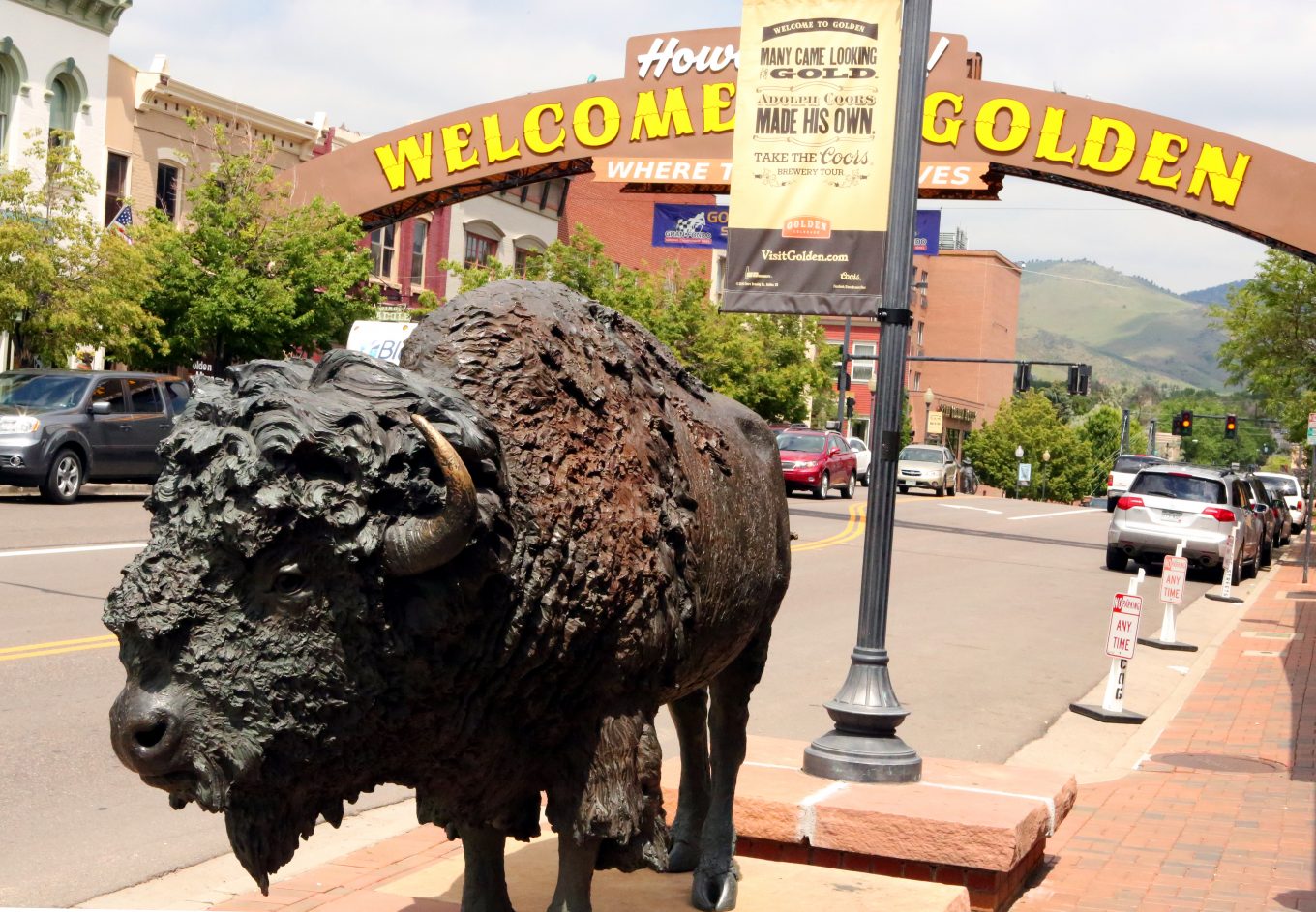 Another opportunity for a local road trip has come our way. No airport hassles, just a beautiful drive through green Colorado mountains with an azure colored sky to accompany us during this summer month of June. We had two mountain towns to visit for our travel assignment; the first is Golden. The second is Frisco (not to be confused with San Francisco), which I will cover for next week’s post.

I decided to pack the very same clothes as I did for our recent trip to the Cumbres & Toltec Scenic Railroad (post is below). Colorado mountain weather can be tricky ranging from cold rains to high altitude heat. Yup, it all worked out just right though I did add a tube of sunscreen lotion.

Golden is about a two-hour drive from our home town. It lies along the Clear Creek at the base of the Front Range of the Rocky Mountains. Nearby in the hills, gold was discovered in 1850. Golden became a commercial center where miners could stock up on supplies before heading for the hills. During the 1860’s the city was considered the Territorial Capital until Denver took over the title, to the dismay of Golden’s citizens.

We checked into the Table Mountain Inn located on the main street, Washington. The decor of the Inn is southwestern with all the lovely colors of sienna, golden yellows and turquoise. Golden has a definite western feeling to it that attracts hundreds of foreigners all year long, hoping to spot a real cowboy.

I like bicycles so I quickly noticed that Golden is one of Colorado’s small towns (population: 19,400) that embraces bikes. There are 24 miles of biking trails. Five shops offer a wide range of bicycles for recreational use or serious race cycling.  A beautiful sculpture of a cyclist adorns a corner on Washington Street.

The street bike racks throughout town are welded in the shape of red, yellow or blue. The Golden Fran Fondo National Championship Series “takes bicycle racing to the next level.” The event is held in several locations throughout the U.S.A. One of these will be in Golden on a June weekend. The trail runs through country roads and consists of different lengths of 30, 60 and 100 miles. Some people ride for a personal goal or a particular cause or competition. An electronic timing-clip is attached to the rider to help keep track of one’s progress. Indeed, Golden is truly a bike-lover’s town!

I strolled through the downtown area and stopped at the Gold Mines Cupcake shop. After surveying the array of delectable cupcakes in the bakery display case, I chatted with the pretty blonde, Sara, standing behind the counter. Along with her mother, Janeen, Sara shared with me that she grew up in the area of Golden and always wanted to have her own business. Together mother and daughter catered for weddings and special events for three years before committing to a retail location.

All the cupcakes are made from scratch daily and come from their own family recipes. The shop has a clean fresh look with cafe-style red chairs and tables that add a rustic touch. I ordered a yummy Turkish Delight cupcake for me and a Snickerdoodle cupcake to take to Ron. Among other creatively named flavors are: Cookies n’ Cream, Birthday Cake, Toasted Coconut, and Diamond White. I think their very clever motto, “Sweetness served in a cupcake” says it all!

In the afternoon I walked to the Astor House, an historic stone hotel built in 1867. This house is on the National Register of Historic Places. The hand-cut stone house was built to last for years and as a result has changed hands of many owners. One notable landlord, Mrs. Ida Goetze bought the building in 1892 for  $907.75. She ran it as a boarding house with family members until the 1950’s. She added a state of the art kitchen in 1890 and installed the first bath tub in town. She would “rent” the tub for 25 cents a bath and made a pretty penny from that alone. The outside upper floor balcony has the best view of downtown Golden.

Ron and I took a tour at the Colorado School of Mines Museum located near their beautiful campus. The school was established in1870 to help train geologists and mining engineers. It has since expanded its curriculum as new technologies have evolved. I was impressed seeing a moon rock and located in another room, the large, jeweled, ” Miss Colorado” crown was on display in a locked glass case. Oh, so very pretty!

Golden is a great place to visit for shopping, dining, and lingering. In 1949, the citizens of Golden erected a large arch over the town’s main street to solidify its status as an authentic western town. The motto painted on the arch says: “Howdy Folks! Welcome to Golden, Where the West Lives”. Now, where did I put my cowgirl hat?