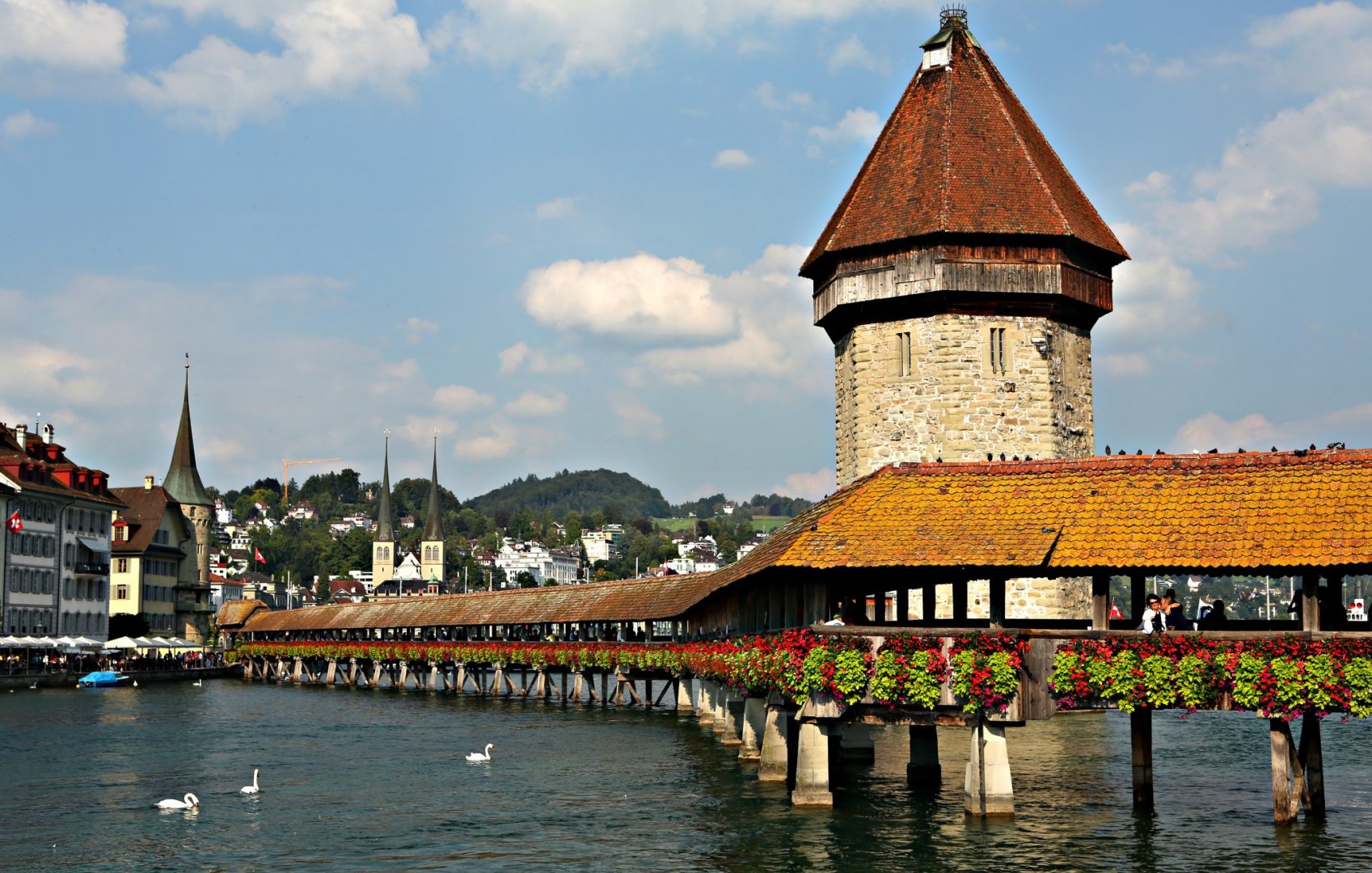 Andre Dumas called Lucerne, located in the geographical center of Switzerland, a pearl in the middle of the world’s most beautiful oyster. The town is nestled between the Alps and the Swiss Plateau right alongside the dark blue waters of Lake Lucerne. Local residents are quite proud of their lake that is enjoyed all year long and shared by paddle steamers, sailboats and water enthusiasts.

Lucerne is also the home of the #1 attraction in the country, the Swiss Museum of Transport. From its dramatic entrance featuring hundreds

of wheels to its many modes of transportation exhibits, it’s not hard to see why this attraction has such a huge appeal.

The museum showcases the development of transportation through the years, including road, rail and water as well as air and space. There are over 3,000 objects to view with many interactive exhibits.

One area houses trains of all shapes and sizes, from horse-drawn railways to steam and electric locomotives. Some of these were designed to ascend the tallest mountains in the country while providing passengers a comfortable and warm environment from which to enjoy the view.

The road display actually looks like a warehouse and is packed floor to ceiling with everything from carriages to bicycles to cars, dating from 1860 up to 2005. This particular interactive display involves a robotic system that takes requests from visitors, grabs a selection out of its bay and lowers it to the floor for closer inspection.

Not surprisingly, the Swiss have thought of everything and have also included old airplanes and even an experimental aircraft all contained within their own hanger for viewing.

The Chapel Bridge is the oldest covered wooden bridge in Europe and one of the most visited sites in the country. Built in the 14th century, the Chapel Bridge was originally

part of the defense system of the city of Lucerne. The days are long gone when this city needs to be defended, but the bridge has remained an enduring work of beauty.

Next to the bridge and part of the old city wall, is the old wasserturm or water tower. This medieval brick building has served as a prison, torture chamber, watchtower, and treasury building and is the most frequently photographed monument in Switzerland.

Mark Twain called this sculpture the saddest and most moving piece of rock in the world. He was talking about the Lion of Lucerne, a carving hewn out of natural rock to honor the heroic deaths of Swiss guardsmen during the French Revolution. And looking at this tragic carving, you can only agree as it is one of the most dramatic monuments in the world. The inscription above the lion reads simply: To the fidelity and virtue of the Swiss.

As I walked the winding cobblestone streets of Lucerne, I couldn’t help but notice tourists pointing their cameras upwards to the many ornate and colorful facades adorning restaurants and hotels. Many of these date to medieval times while others are more recent or have been restored. Most tell stories about events or celebrations that occurred within the city.

If you are interested in Classic Modernist art, then stop by the Rosengart Museum, which houses a private collection of masterpieces assembled by Siegfried Rosengart and his daughter Angela. Picasso, Klee and Matisse are among the featured 21 artists and their works of varying abstraction.

Mt Pilatus and the Golden Round Trip

This is one unforgettable side trip you must take. Known as the Golden Round Trip, this includes the boat trip from Lucerne to Alpnachstad and a ride up the world’s steepest cogwheel railway to the Pilatus Kulm peak.

The ride to the top of Mt. Pilatus is one of the most spectacular you will ever experience. It is hard to imagine that the engineers and workers who built the track were able to construct such a massive feat while overcoming the obstacles presented by the steepness of the te

Once at the top, the panoramic views of the lakes and mountains of central Switzerland are spectacular. The grand finale of your trip includes an aerial cable car and gondola ride that gently glides you down along the spine of the mountains to the town of Kriens where a short bus ride brings you back to Lucerne.

But, what’s the hurry? If you are visiting during the summer months, like me, then you will want to linger at Mt. Pilatus before hurrying back down. The Hotel Pilatus-Kulm is where you will want to book at least one overnight stay on the mountain. 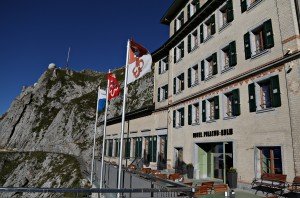 There is a budget property and another more upscale boutique hotel (Belle Epoque), which is where I stayed. The rooms are bright, cheery and comfortable. Opening your window lets the cool air in and the sights to the valley floor below are no less than amazing, especially at sunrise and sunset.

You might also see some brave souls paragliding down from the mountain’s summit. This would, of course, be a faster way to descend but I much prefer the slower, safer method. Still, seeing colorful sails floating against a cobalt blue sky is a sight to behold.

The on-site restaurant Queen Victoria (She visited here.) is a great place to relax, have some fine wine and a good meal b

efore strolling outside to watch the setting sun.

Even if you’re not spending the night, as an alternative to immediately descending Mt. Pilatus by aerial tram, you may want to visit Fräkmüntegg, home of central Switzerland’s largest ropes park, especially if you have kids, as they will love playing on all the treetop level attractions.

Finally, when you’re ready, the gondola will bring you gently down to the town of Kriens and back to Lucerne via bus. You can pack a lot into this one to two-day trip and temperatures can drop at the summit so dress accordingly.

This is another one to two-day sightseeing trip from Lucerne to the lakeside village of Vitznau. Actually, Lake Lucerne is dotted with many small towns, some of which you will see along the way as pick up and drop off points for travelers on the boat.

As you are approaching Vitznau, you will see the imposing white façade of the Park Hotel Vitznau, which was originally opened in 1903. It has most recently undergone a 3-year renovation that included the incorporation of 47 kinds of granite, natural stone from Bulgaria and innovative high tech gadgetry in each of the rooms.

This is definitely a luxury property and worth saving up for if for nothing more than one night’s stay. Our deluxe suite

had a large sliding door that opened onto the balcony where we had an unobstructed view of Lake Lucerne. This would be the perfect romantic spot for an anniversary or special occasion.

We had breakfast in their PRISMA restaurant which affords a 180 degree view of the lake and adjoining pool. It felt like we were inside a glass cube and the sights and the food were quite impressive.

Directly behind the hotel is the looming Mt. Rigi, also known as the Queen of the Mountains with the highest peak topping 1,797.5 meters. A short walk into town brought us to the start of our ascent up to the Rigi Kulm by gauge rack railway. The Swiss Pass, which you can purchase ahead of time, also gives you access to lake transportation as well as most of the railways.

The ride to the summit takes about 45 minutes and the sights along the way are incredible with picture perfect Swiss chalets, cows with cowbells grazing in pastures and ever expanding views of Lake Lucerne below.

Once at the Rigi Kulm, there are any number of paths you can take but one of them will lead you to Alpkase Kaserenholz or the cheese dairy where you can take a break and sample their homemade Alpine cheese. You can even bring back one of their giant cheese wheels, as long as you don’t mind toting it down the mountain.

The views from Rigi are simply stunning and if you are a photography buff, you will find no shortage of opportunities along the way. I think there is something special about the spectrum of light in this area that makes colors seem much more vibrant.

Switzerland is one of the great hidden tourist destinations. From the blue waters of Lake Lucerne to the heights of Pilatus and Rigi, this is a diverse destination that, like many of the wines here, needs time for its splendor and riches to be properly explored.

FTC Disclaimer: Promotional considerations for this trip were provided by the suppliers listed below.

www.magellans.com (My choice for travel apparel, luggage, gear and accessories)