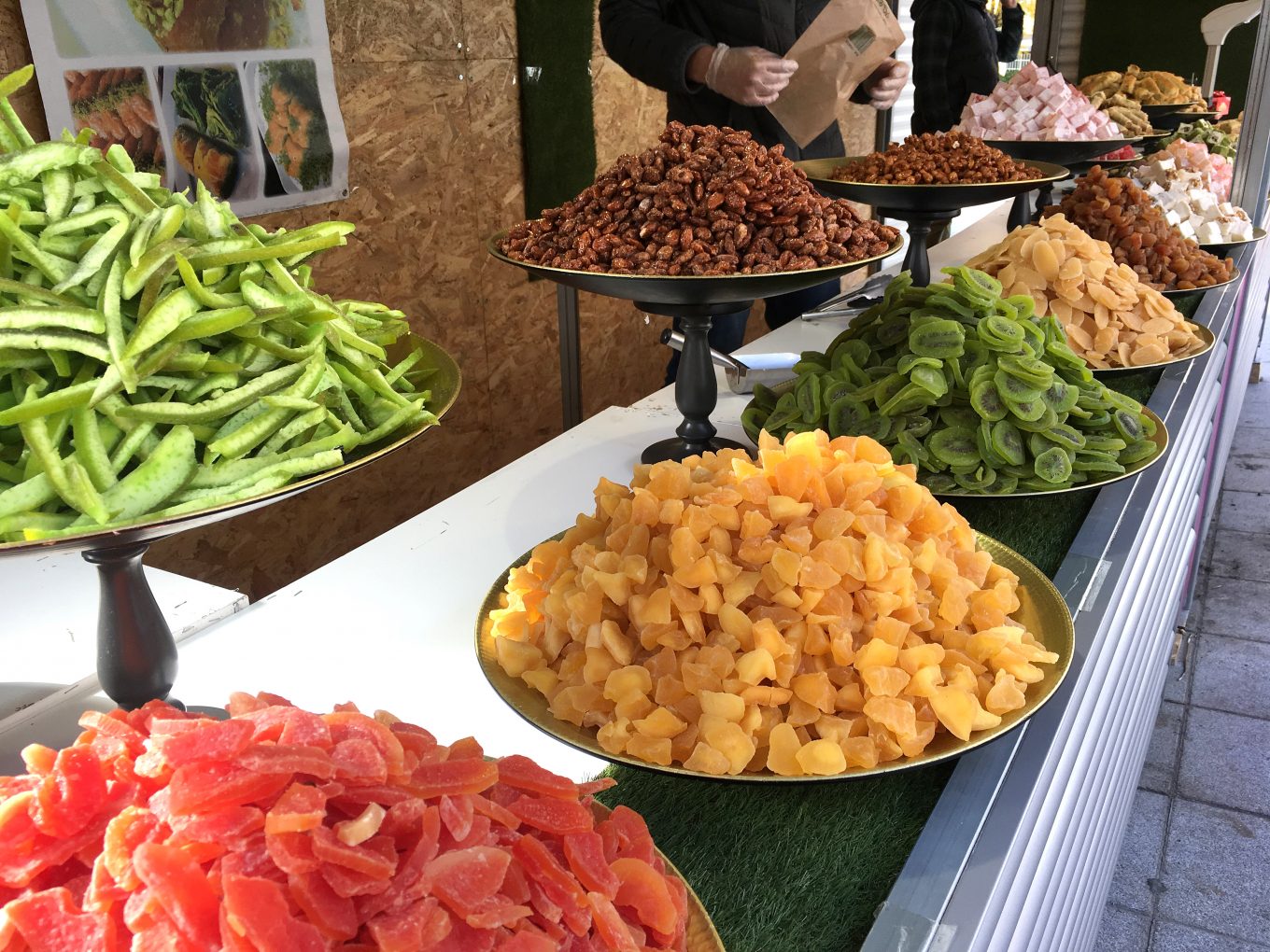 Madrid is a city of passion! Locals, known as madrileños, are ardent about their history, culture, and perhaps, most of all, their food. From tapas to tomatoes to treats, they love it all and are eager to share their love with visitors looking for a sensory culinary taste explosion.

Unlike those living in the U.S., Spaniards prefer to dine late. Whereas Americans might eat at 6 p.m., here in Madrid it isn’t uncommon to start a meal at 9:30 p.m. or 10 p.m. This is when things really start happening anyway as the downtown neighborhoods get filled up with locals and tourists sampling tapas at some 250 tapas bars.

These are colorful, vibrant places where you can mingle with the locals, engage in good conversation, and sample a glass of Spanish wine or beer for just a few euros. Drinks are usually accompanied by a complimentary small plate of bread, olives, cheese, jamón (ham), or seafood. 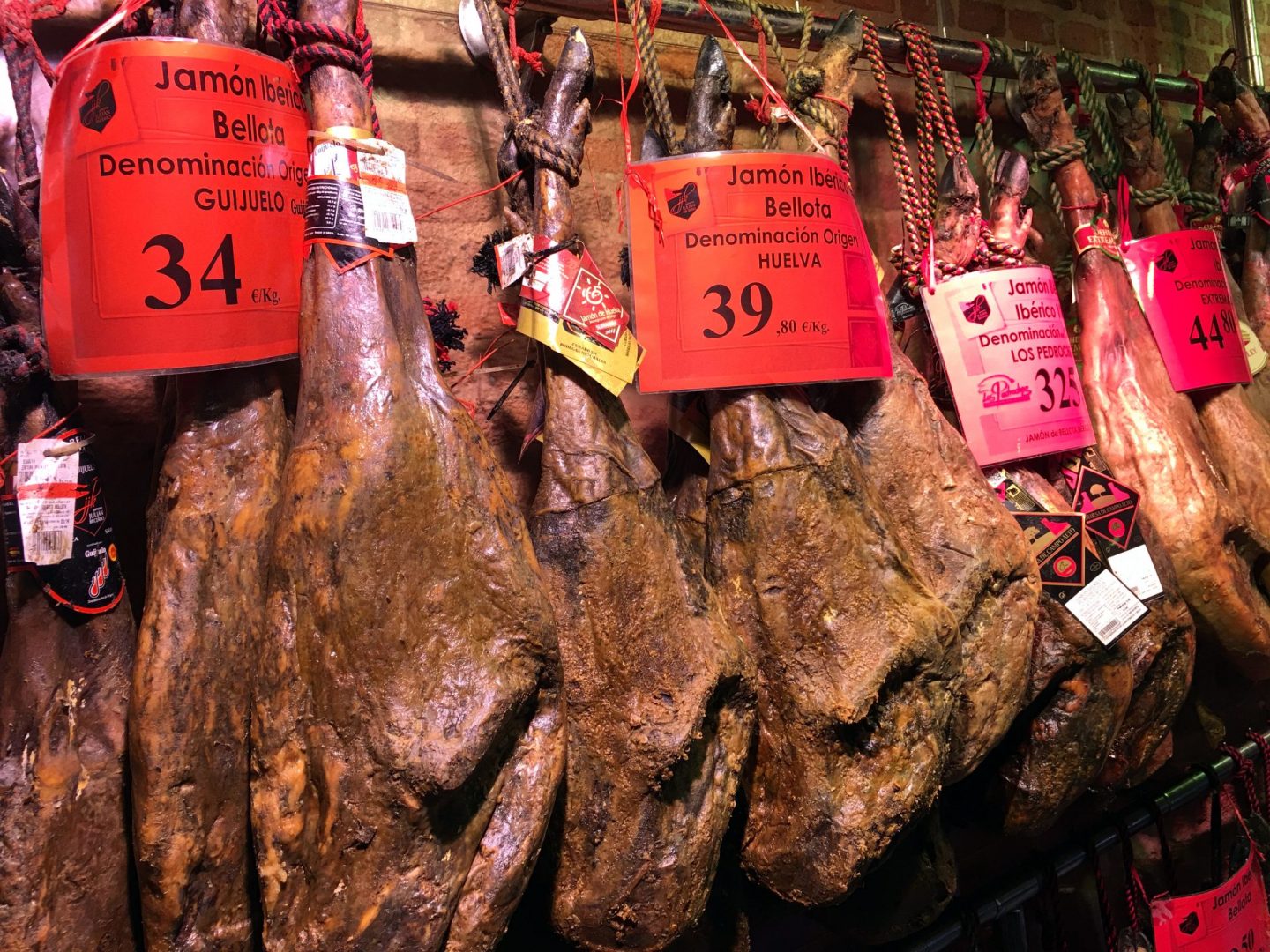 Speaking of ham, the people here are crazy for it, and it is almost a national obsession. But, unlike the thick cuts of meat one might get in the U.S., here the slices are carved wafer thin and served alone as a starter or with bread and other accompaniments. Huge legs of ham hang in the shops and are on display in restaurants and packaged for take home in high end department stores. The best Iberian ham (such as Bellota) comes from animals that roam freely, eating a diet mainly of acorns. This is what makes cured Iberian ham, according to locals, unparalleled in the world.

You will want to take time to stroll around the various neighborhoods such as La Latina, Chueca, Las Letras, and Santa Ana. You probably won’t get very far until you are drawn into the enticing storefronts. What sorts of foodie finds will you see? How about fine Spanish wine shops (bodegas) offering bottles for around 10 €. Or crusty bread in various flavors and fresh from the oven. Olive oil is unbeatable here, and most comes fresh from local producers straight to the shelves. (Save room in your suitcase.) Then there are chocolates, truffles, mushrooms, and flavorful tomatoes the size of small volleyballs. 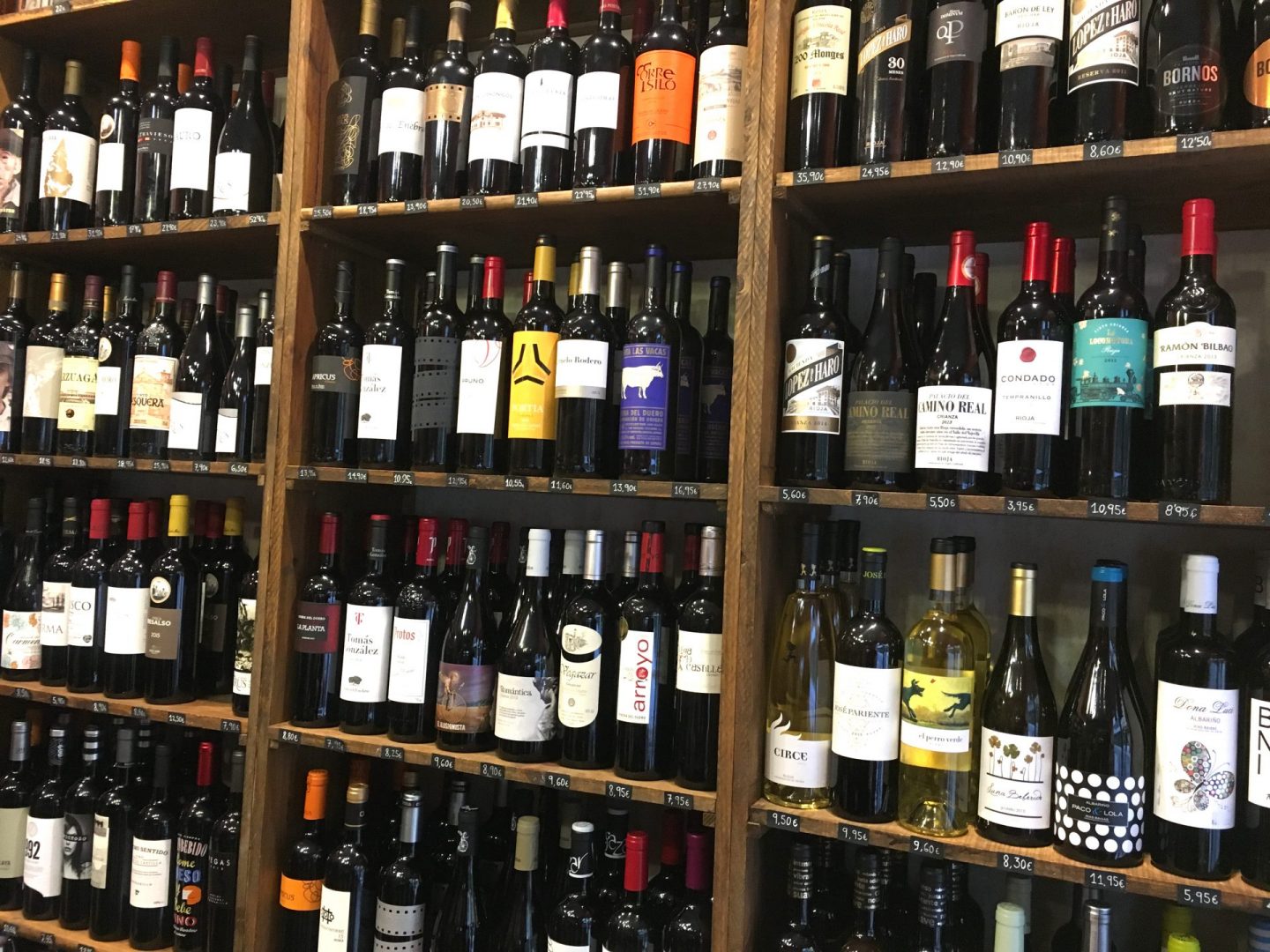 In Madrid, you will experience it all from high end indoor food markets such as Mercado de San Miguel to the iconic El Corte Inglés department stores, including one just for men and one for women. On the ninth floor of Corte Inglés Callao, you will find The Gourmet Experience, featuring a cornucopia of some of the best food items the country can offer.

At last count, Madrid has 14 Michelin-starred restaurants. There are 3 chef-run eateries, totaling 7 stars, located inside El Corte Inglés. These include StreetXo (global street food) by David Muñoz (3 Michelin stars); Cascabel (Mexican) by Roberto Ruiz (1 Michelin star); and Rocambolesc Gellateria, serving gourmet ice cream by Jordi Roca. Roca is also a Michelin-star chef and his El Celler de Can Roca was named best restaurant in the world in 2015 by Restaurant Magazine. 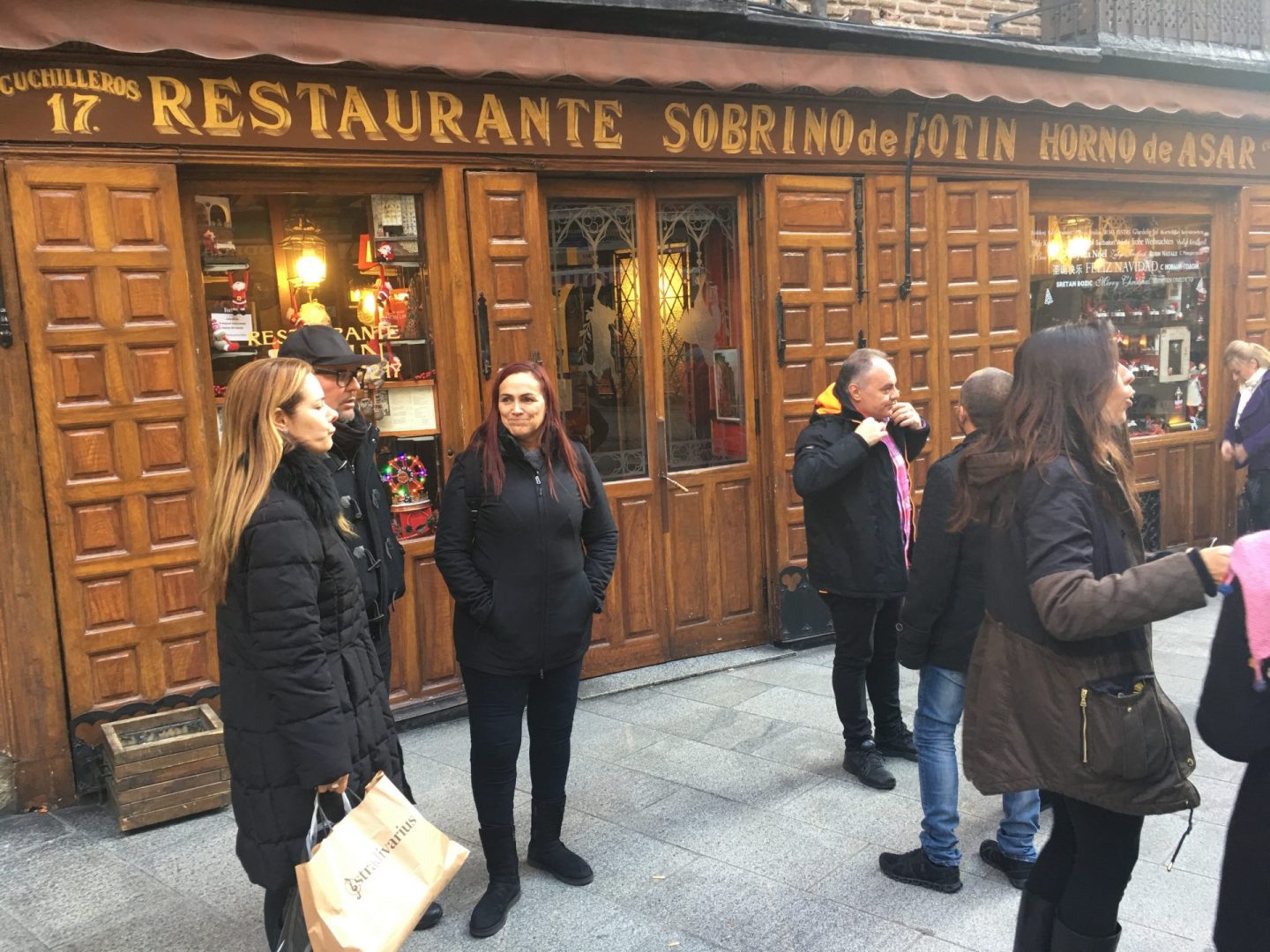 If you’ve ever wondered where the oldest restaurant in the world is, that distinction is given to Madrid’s Restaurante Sobrino de Botin located at Calle Cuchilleros, 17. Having been in continuous operation since 1725 (They have the Guinness certificate to prove it.), their specialty is suckling pig.

Many famous people have visited over the years, including Hemingway and the artist Francisco Goya, who was employed as a waiter before attending the Royal Academy of Arts.

Of course, there are many other sit-down restaurants that you will want to try, including Atico Restaurante by Ramon Freixa, serving Spanish and Mediterranean fare. Afterwards, check out their rooftop terrace for fabulous views. At Lhardy Restaurant, you can dine on regional dishes, including their fabulous Madrid Cocido prepared with chickpeas, meat, and vegetables. For the ultimate in the trendiness category, book a reservation in advance for Amazónico. The mouth-watering aroma of meats grilling on an open flame in the kitchen greets your senses as you enter this eatery lavishly decorated like the Amazon jungle. 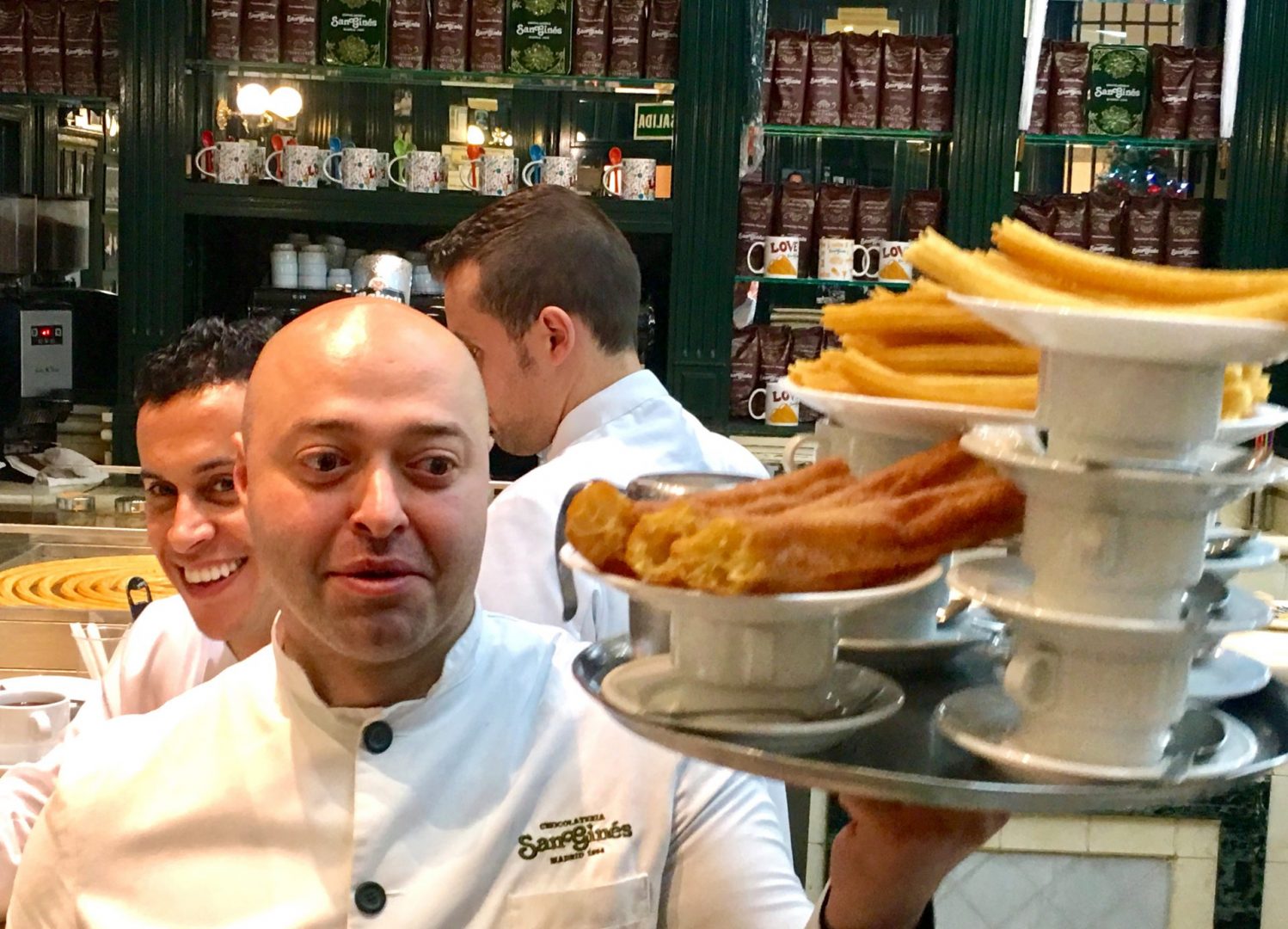 Not to neglect breakfast but you will have to adjust your thinking beyond typical bacon and eggs. You are in Spain, after all, and here you will want to make your way to a little passageway near the Puerta Del Sol public square to find Chocolatería San Ginés for chocolate con churros. Believe it or not, freshly made churros and hot chocolate are wildly popular in Madrid, so much in fact that this spot is open 24/7.

With a history dating back to 1894, this café turns out freshly made, lightly battered and fried churros served with a cup of thick, hot chocolatey goodness with a hint of cinnamon. Downstairs is the best place to eat as the space is decorated with turn of the century green wooden paneling and mirrors as well as matching upholstered seating. This is a decadent culinary experience that you will savor as you dip your churro into the chocolate and let the flavors meld in your mouth. 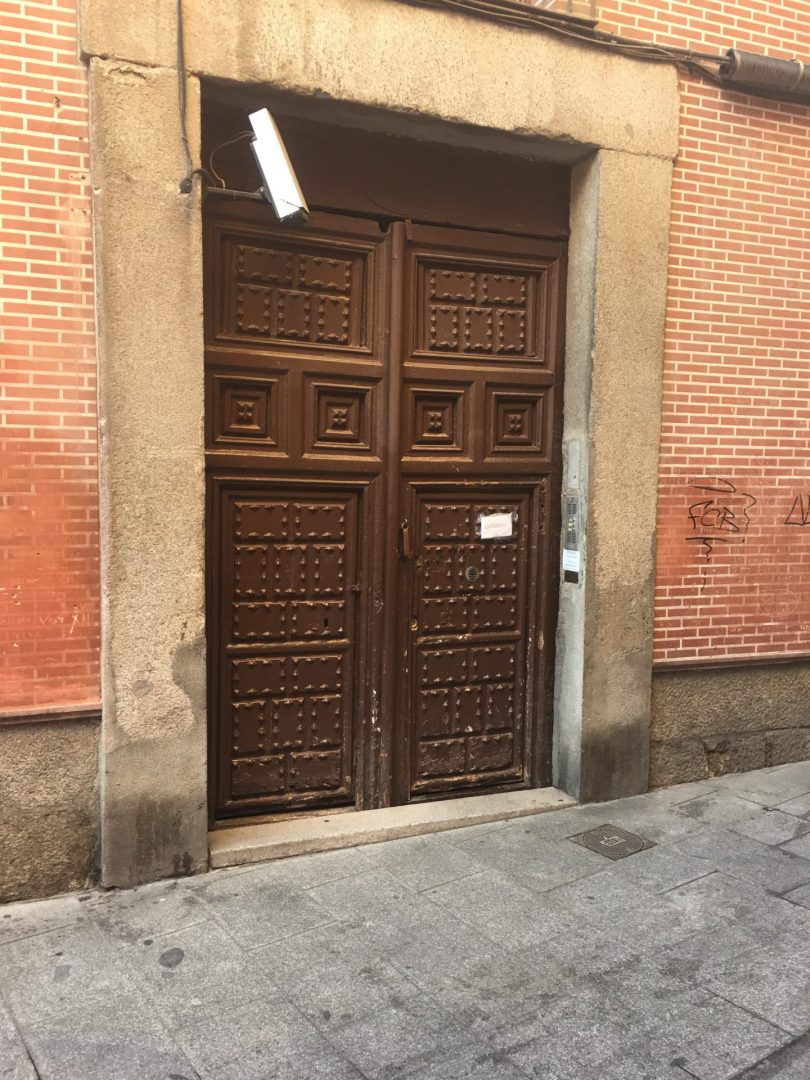 Every city has its little culinary secrets, and here, tucked innocently along Calle de Puñonrostro, #3 is a tall wooden door that most just walk right by. But don’t! This is the entrance to the Monastery of Corpus Christi, home of a convent of cloistered nuns. You will also see a small sign that reads, Horario: Venta de Dulces as well as a buzzer. If you are fortunate to visit when they are open, this is the place to get your secret sweets (dulces) or cookies, depending upon what they made that day. After you enter, you will come to a small window with a little turntable. It is helpful if you speak a little Spanish so you can ask what they have (Qué tienes?). After paying several euros, you will be rewarded with a small box of cookies or sweets adorned with the name of the monastery. Cherish your victory as you enjoy your delicacy in your search for the best of heavenly Madrid.

This is a beautiful, luxury property ideally located for exploring Madrid. The service is impeccable, the rooms are clean and comfortable and a full breakfast is included with your stay.

A national treasure, the museum has an extensive collection of European art from the 12th century onward. Masters such as Velasquez, El Greco, and Rubens are featured. They also have a stunning copy of the Mona Lisa with a colorful background believed painted at the same time as its famous cousin in the Louvre.

This site is a must-see and is located a short drive from Madrid. Declared a UNESCO landscape in the cultural heritage of humanity site in 2005, two rooms have to be seen to be believed: The porcelain room and Moorish room.

If you have never seen a flamenco show, this is the one you will want to experience. Book a reservation that includes dinner and come see a visual feast for the senses.

This was a sponsored visit; however, all opinions herein are the authors. 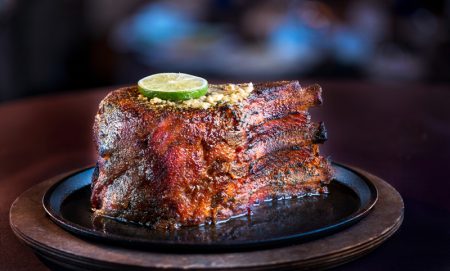 If there is a silver lining to COVID-19, it may be that more restaurants are extending their reach with home delivery options. With more than..
Read More