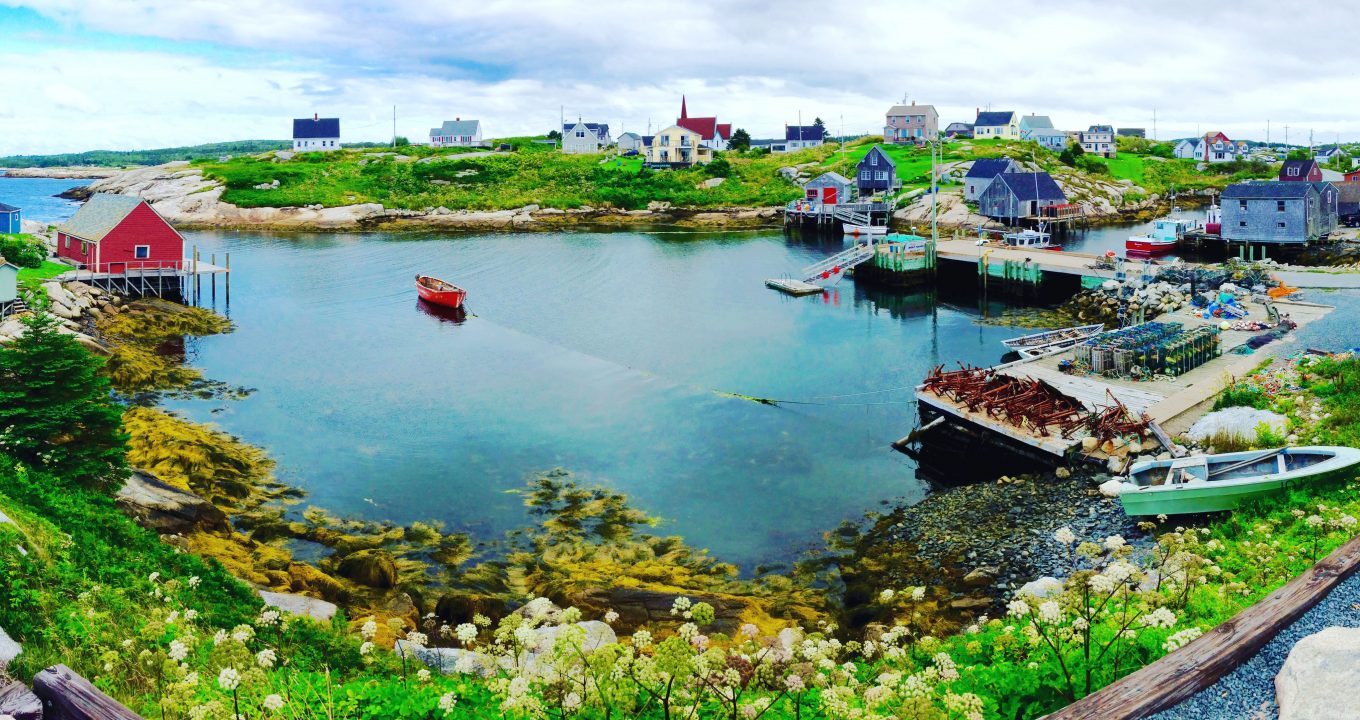 The early morning sun peeked through our curtains as our ship eased into its berth, her engines slowly rumbling as she maneuvered into position. Rather than totally wake me, however, the sounds and gentle vibrations lulled me back into a deep slumber. My wife, Nancy, as it turns out, slept through the entire docking process. This is the kind of relaxing vacation that suits us, I thought.  After a few more restful hours, we would explore Quebec City, the first Canadian port of call aboard the Zaandam, one of the ships in the Holland America fleet.

Our seven-day route would take us from Montreal to Boston which are the embarkation and debarkation points. The other destinations included Quebec City, Charlottetown, Sydney, Halifax, and the New England Town of Bar Harbor, Maine.

Holland America caters to more of a senior clientele, which includes both of us, although they are trying to attract more multi-generational travelers. The Zaandam has a relaxed, laid-back vibe without all the high-octane trappings on some other lines. Here, we could sleep in, dine at casual or premium restaurants, enjoy afternoon tea, sit in the hot tub, and explore the interesting history and culture of Canada—basically, everything we love to do on cruises.

While we were waiting to board, we chatted with Sue Cameron, a fellow Coloradan. This was her seventh Holland America cruise and she seemed just as excited as if it were her first. “I love Holland America,” she said. “It’s low key and I can just sit back, relax, and do whatever I want.” Sounds like just the ticket.

Carrying over 1,400 passengers, the Zaandam is one of Holland America’s smaller ships, but that doesn’t mean they skimp on the essentials. While onboard, we enjoyed fabulous shows, ordered excellent meals from room service, took advantage of the retail shop sales, and made new friends in the bars and lounges. Our ocean-view suite came with all the amenities, including a nice-sized bathtub.

We hardly felt the movement of the ship along the various waterways, and each morning we woke up to a new port.

Here are some of the highlights:

At our first port and one of my favorites, I dusted off the couple of French words I knew for our walk into Old Quebec (Quebec City). “Bonjour,” said the shopkeeper as I entered her patisserie in the quaint Petit Champlain Quarter. I returned the greeting with my best French accent as I chose a lovely croissant. “Merci,” the only other word in my vocabulary, was my farewell as I left to enjoy my treat on the fly.

The city looks like something out of a French storybook with winding, cobblestone streets, trendy shops and cafes, museums and churches, and New France-style architecture, all tailor-made for curious travelers.

I took the funicular to the upper city, which offered commanding views of the St. Lawrence River as well as our cruise ship docked in port. Here, the Chateau Frontenac hotel towers over the town, surrounded by colorful gardens, street musicians, and tour groups telling the story of Old Quebec in multiple languages.

One of the more fascinating historical footnotes was a campaign by the Colonial Army and Benedict Arnold during the Battle of Quebec in December 1775. After attempting an advance on the city, cannon fire wounded Arnold and killed a number of his troops. Further attempts proved unsuccessful and the Americans subsequently retreated. A plaque commemorating this British victory is prominently displayed on one of the walls in the Old City.

Nancy opted for the culinary tour, which featured tasty samples of poutine (french fries with gravy and cheese curds), regional wines and homemade sausages. Her favorite, however, was the maple syrup lollipop, made by pouring hot syrup over ice, dipping popsicle sticks into the mix, and letting them cool— sweet and delicious!

The smallest of the Canadian provinces, Prince Edward Island (P.E.I.) was our next port and is best known as the setting for the book Anne of Green Gables. Published in 1908, this beloved novel has been popularized in movies and TV shows around the world. As we passed through the ship terminal, tour groups were lining up behind all sorts of Green Gable tours, including my wife who was looking forward to the Anne and Gilbert musical playing at the local theater.

As for me, I hot-footed it past the gift and souvenir shops along Victoria Row and made my way back to the harbor where I was looking forward to a couple of my obsessions: a lobster roll and Cow Ice Cream. I had a hard time deciding among the various fast-food eateries, but a local suggested the Water-Prince Corner Shop. With large chunks of premium lobster and sauce on a toasted bun, I was in crustacean heaven.

Cow’s Ice Cream was rated by Tauck World Discovery staff as the world’s best in 63 countries. I chose the Royal Canadian Mint, a decadent blend of chocolate and peppermint. Now I could die happy.

This port is situated on a harbor of Cape Breton Island. Leaving the ship, we discovered Sydney’s most iconic, musical landmark— The Big Ceilidh Fiddle. Standing 55-feet tall and weighing 10 tons, this is reportedly the largest illuminated fiddle in the world. Of course, I wanted to know why a colossal fiddle was on the dock and was told that Sydney has a strong Gaelic heritage. The word ceilidh conveys the idea of an informal gathering accompanied by folk music.

The other attraction available as a shore excursion was The Alexander Graham Bell Museum, located about 1.5 hours by bus in Baddeck. Nancy took this tour, which offered a fascinating glimpse into the life of this prolific scientist and inventor. Although he is best known for his invention of the telephone, Bell also is credited for the graphophone that could playback sound, a metal detector, and a hydrofoil boat that broke a speed record as it skimmed across Baddeck Bay at 114 km/h.

A bagpiper playing a toe-tapping tune greeted us as we descended the gangway. Known previously as The City of Sorrows, Halifax has seen its share of tragedy. In 1912, the Titanic sank 600 miles off its shores and more than 150 victims now lie in three Halifax cemeteries. Among these are the presidential secretary of the White Star Line, orchestra members, and coal stokers.

A lesser-known devastating event happened just five years later known as The Halifax Explosion. Two ships (one laden with 200 tons of TNT) collided in the harbor in December 1917. The French ship Mont-Blanc caught fire and slowly drifted to shore. The townspeople could hardly imagine the fate that was about to befall them. At 9:05 a.m. the ship exploded, the largest man-made explosion prior to the Hiroshima atomic bomb. Most of the town was destroyed and more than 1,700 people lost their lives.

Today, happier times prevail, and Halifax is known as The City of Trees. Indeed, greenery is everywhere. We strolled along the beautiful wood Halifax Boardwalk featuring shops and restaurants as well as the Maritime Museum of the Atlantic. This popular attraction houses a unique collection of exhibits from the explosion and actual relics of the Titanic.

As we cruised back into the U.S., Bar Harbor came into view with its crescent-shaped harbor framed by a flotilla of private yachts and sailboats. The island is called Mount Desert and is dotted with picture-perfect villages with old-fashioned retail shops. These are the sort of places where the spring-loaded screen doors creak open and then slam shut behind you.

As we reclined on a bench overlooking this New England city, we contemplated our last week aboard. We had traversed 1681 miles along various Canadian and U.S. waterways. Along the way, we learned something of the rich and diverse culture and history of this part of Canada. And, of course, Holland America made our journey delightfully effortless while allowing us to enjoy it all in style, comfort and at our own pace.

Pinnacle Grill- One of the premium restaurants specializing in steaks and seafood. Make sure to try their candied bacon!

A recent upgrade offered by Holland America provides an exclusive level of luxury for its guests. This includes priority check-in and seating at restaurants, special dining options, and many other enhancements.

The author was a guest of Holland America.

This story was first published in The Epoch Times