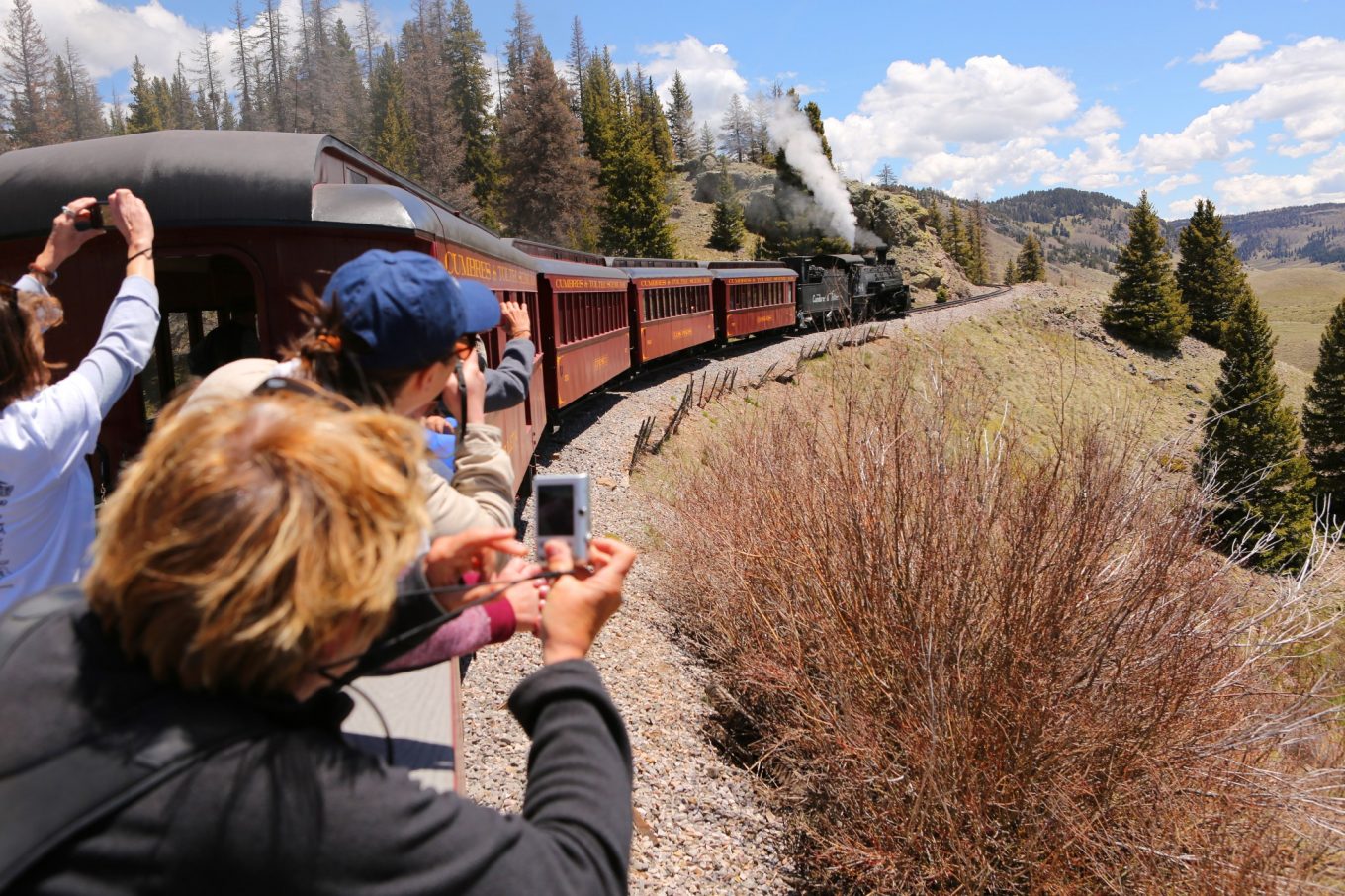 Once in a blue moon, Ron and I have the privilege of taking a road trip. Road trips can be so refreshing because we get to avoid the hassle and chaos of the airports. Ron was assigned a press trip for the Cumbres &Toltec Scenic Railroad that runs back and forth over the southern and northern borders of Colorado and New Mexico. Its location is only about a six hour drive from our home.

We packed the suitcases, camera equipment, and a small cooler into the car for our three-day trip southward. As we drove through the small town of Walsenberg, Colorado, we saw this hand printed sign sitting outside of a general store.

We spent the first night in Antonito, Colorado at the Steam Train Hotel, built in 1911. It’s a two-story building with 15 rooms. It was completely remodeled in 2010.

The managers, Tegan and Paul, along with mom, Jeanne, are very hard working and sweet people that keep the hotel in ship-shape condition. Our room was clean and comfortable. The bed’s top cover is washed after each guest’s stay; something that some of the big hotel chains don’t do.  I was intrigued by Tegan’s name, as it sounded familiar but unusual, if that makes sense! She said she’d been named after Tegan Jovanka, one of the Fifth Doctor’s companions in Doctor Who. She hadn’t liked the name when she was younger, but now she loves it!

A unique site to visit is “The Indy House” that is available to rent by day or by week for interested movie fans. This is the actual vintage house filmed at the beginning of the film, Indiana Jones and the Last Crusade.  It’s located only a short walk across the railroad tracks that River Phoenix’s  character ran across to get home.

The next morning, breakfast was made to order. We both chose the waffle and egg combination. I thought it a bit funny when Tegan shared with us that the “DONE” button on the waffle machine was broke, so she had to keep peeking at the waffle to see if it was properly cooked. She got it perfect; it was the best waffle I’ve eaten in years.

After breakfast we headed a few blocks south of the hotel to the Antonito rail station and boarded the Cumbres & Toltec Scenic Railroad.

This vintage train runs from Antonito, Colorado to Chama, New Mexico. It passes through heart-stopping scenery of the plains and proceeds into the San Juan Mountains with pine trees, steep canyon walls, and bridges over gorges. The old-fashion passenger cars are pulled by a coal-fired, steam powered locomotive. The gondola car is located near the back of the train.

It is an-open-to-the-elements, standing-room-only car for the use of anyone on the train. This is where Ron and all the camera buffs hang out because it affords the best unobstructed view of the terrain and is ideal for taking photos. It is also the spot where the soot and steam from the  locomotive drifts over the passengers and can give one an old-time journey back into the past.

Halfway to our destination, the train came to a smooth halt in the small mountain town of Osier and everyone disembarked into a large dining hall for lunch. Buffet-style counters offer turkey dinners, meat loaf, a well stocked salad bar, veggies, bread rolls, and a fine selection of desserts.

The train’s guests sit along long dining tables in a high-ceiling room with large picture windows overlooking a lush green valley. It was a good opportunity to meet fellow travelers  and find out where they came from.

Towards the end of our train journey I spotted the train conductor, Alan Loomis, on his protein bar break. He was sitting in a chair tucked into a corner of one of the passenger cars. Ron asked him if I could have a quick interview  with him. I really thought he would be far too busy for that, but he graciously said he could spare a few minutes.

My first question was, “When you were a little boy, did you dream of becoming a train conductor?” He laughed and said, “No, it never entered my mind!” Mr. Loomis said it probably all started when  he was a child growing up in the north mid-west of the United States. After Sunday morning’s church, his parents would take him for long afternoon drives through the surrounding countryside. Hours of staring at the passing beauty of nature left a dream in his heart to work oudoors. But that dream quietly diminished as the years passed by.

As a grown up he worked in the corporate world in a busy city. One day in 1990, Mr. Loomis  and his wife chucked this life-style and relocated for the very quiet life in Chama, New Mexico. Eventually a friend of a friend offered him the job of a brakeman on the C&TSRR. He learned quickly to love it. After three years he was offered the job of train conductor. That position too, “grew in his bones”. During that time, a memory flashed in his mind and he realized  his boyhood dream of working outdoors came true.

Every day at his job, as the train passes through miles of drop-dead gorgeous scenery and with the wide cerulean blue skies, he feels he is truly a blessed man. He said that he is so fortunate to meet happy people from all over the world.

On this particular day, there were Germans, Italians and English travelers on board. Working on this historical train was like being on a moving museum. His desire is that more people will come and experience this great pleasure!

Our second night’s stay was in the town of Chama, Now Mexico, population: 100.

In Chama, the train station is on the west-end of the rail line. We checked into the Parlor Car Bed and Breakfast located across the street from the station. The owners, Wendy and Bonsall Johnson, share their fairy-tale looking house with visitors, most of whom are in Chama to ride the C&TSRR.

Their house was built in 1925 and has a very charming homey feeling. For breakfast, we were served eggs benedict, fruit juice, coffee and tea, ending with two tasty mini-cinnamon buns.

Ron and I have traveled on other vintage western Victorian trains.I’ve written a chapter about those trips in my forthcoming book, “The Travel Writer’s Wife”.

As is my usual custom, I like to bring home a new book from a trip. In this case it was Ticket to Toltec by Doris B. Osterwald. This book had a LOT of interesting facts about the Cumbres & Toltec Scenic Railroad.

Overall, it was a very relaxing trip. I fount it to calm down any hectic business of the past week. As I started to stare out the train’s large picture window, it allowed me to think luxuriously about nothing.