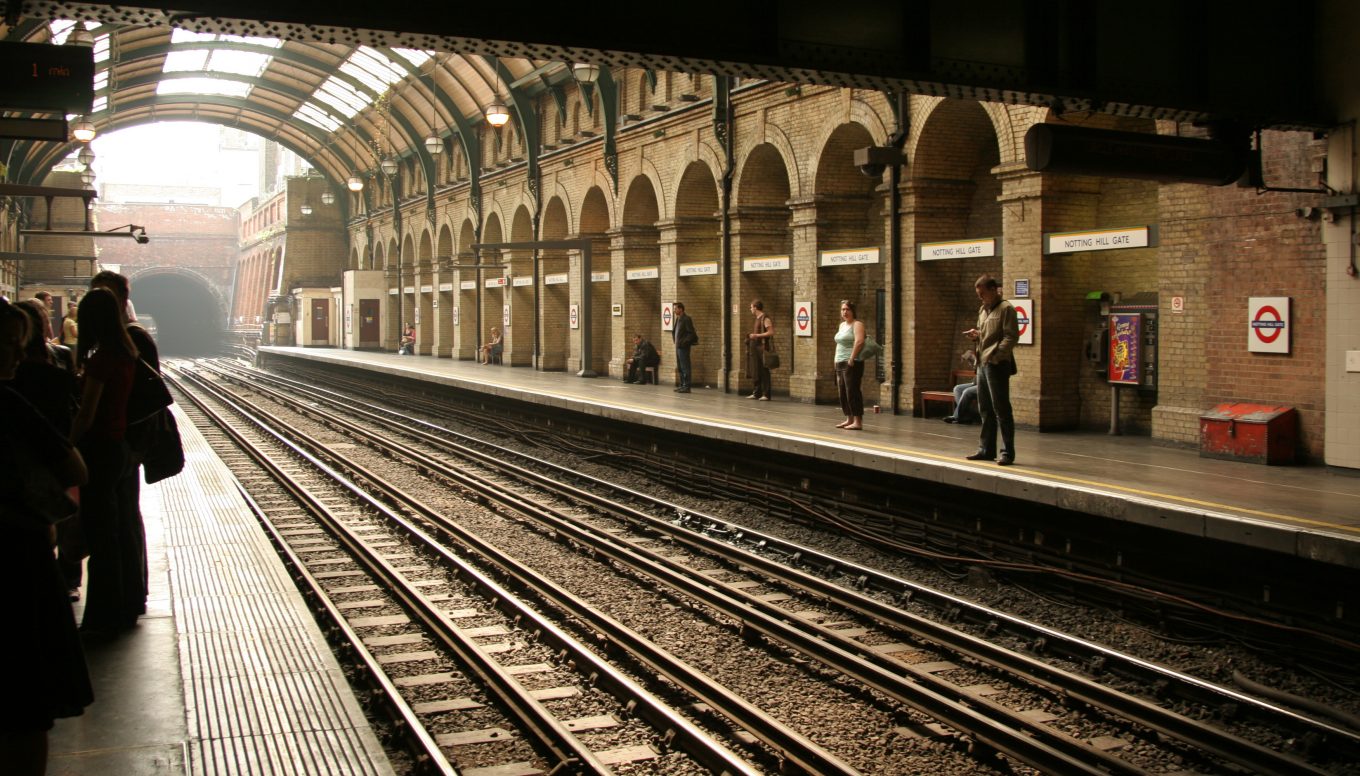 Most of the big cities in the world have their own system of a subway. Some of the subways are plain and functional; some are beautifully decorated to impress visiting tourists  (i.e.: Paris’s Louvre Station). I have always loved riding on subways while sneaking in some  people-watching. I find it interesting to see how each city has the train lines all laid out.

This is a little experience I had on London’s subway, known affectionately as “the Tube”.

Typical Tube Station
This one is in Notting Hill

When I was an art student living in London, I would haul all my art supplies and drawing board then proceed to squash my body  into a train car during peak hours. Because it was such a unique way to travel across town, I never really got tired of riding the tube. Sure beats the gnarly Los Angeles freeway driving I did before moving to England.

One of the social manners I had to get use to on the tube was the unwritten etiquette rule of speaking very softly or not at all.That was okay with me, I really didn’t want people to hear my American accent. I wanted to pretend I was one of them. I did a lot of people-watching and even eavesdropped on some their conversations.

Several months into being a seasoned tube-traveler, I was riding back to my flat in Earl’s Court after a long day at art school. It was a very cold day. So along with my usual haul of art supplies I was wearing a very  thick heavy coat with required winter accessories of a scarf, hat and gloves.

When the train got to my stop, I exited off with everyone else. Some construction work was going on in the underground areas. So we all had to follow “detour” signs that led to a huge old fashioned caged-style lift (elevator) that would take us up to the street level exit. Our large group squeezed tightly shoulder to shoulder into the lift. I felt a bit sorry for the person standing right next to me because my drawing board kept stabbing into his knee.

The lift proceeded to carry this load of “sardines” northward. Halfway between levels, it stopped
cold.  I could hear the person who was standing by the emergency buttons, frantically pushing the red button to no avail. Again, the rule of silence apparently applied for this situation too. I kept quiet. It was starting to get very hot. There was no elbow room, whatsoever, to remove my heavy coat.

Everyone was tired from their busy work day and like me, just wanted to get home. Any minute now, I expected someone to faint, cry or go over the edge as a result of our imposed claustrophobic situation. This is when I began to perceive the popular 1940’s British war-time motto, “Keep Calm ad Carry On”.  Makes so much sense in many ways.

Big Ben refers to the bell inside
this clock tower.
The official new name is
The Elizabeth Tower.

Just about when I felt that something really bad was going down, we heard footsteps running in our direction. An underground construction worker came running to our temporary hanging jail. He yelled up politely with a Cockney British accent, “So very sorry, we do apologize for any inconvenience. Is everyone alright?”

One man, who quickly decided to be our brave leader, called down to the worker, “Yes, quite. Thank you!” The worker then asked, “Are you in need of anything?”

Brave Leader replied, “Could you be so kind to bring us 30 cups of tea, please?”

There was a soft chuckle among our group of lift-captives. I personally thought it was hilarious and I had to suppress a hearty laugh. I didn’t want my newly acquired hanging-lift friends to think they would be stuck with a brash American.

After a couple of minutes, we heard a machine-sound clunk and the lift proceeded upward to street level. Everyone quietly departed and continued on home in their different directions.

I just stood there thinking what a unique London experience that was, don’t think I’ll ever forget it.